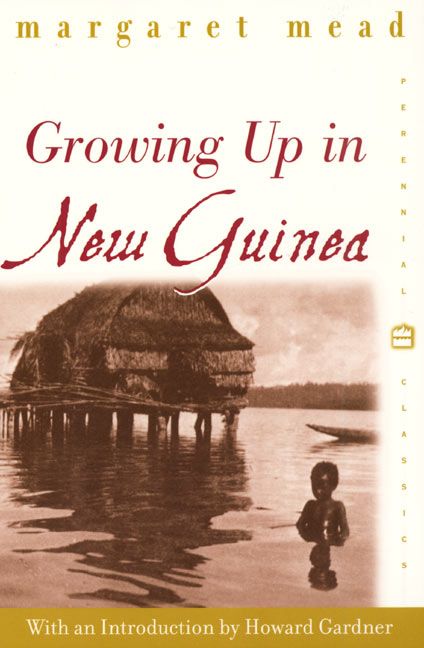 “Children are taught to talk through the men’s and older boys love of playing with children.

There is no belief that it is necessary to give a child formal teaching, rather chance adult play devices are enlisted. One of these is delight in repetition. Melanesian languages very frequently use repetition to give an intensity to speech. To go far is expressed by “go go go”, to be very large by “big big big.” So an ordinary anecdote runs: “So the man went went went. After a while it was dark dark night. So he stopped stopped stopped stopped stopped.” (30)

“Young men do not have houses of their own, but live in the backs of the houses of their older brothers or young uncles. When two families live toghether the wife of the younger man must avoid the older man. She never enters his end of the house, partitioned off by hanging mats, when he is at home. (30)

“But although the family group is small, and the tie between children and parents close, the relationship between husband and wife is usually strained and cold. Father and mother seem to the child to be two disparate people both playing for him against each other. The blood ties of his parents are stronger than their relationship to each other, and there are more factors to pull them apart than there are to draw them together.” (31)

“To the Manus adult, trade is the most important thing in life; trade with far-away islands, trade with the land people, trade with the next village, trade with relatives-in-law, trade with his relatives. His house roof is stacked with pots, his shelves piled with grass skirts, his boxes filled with dogs’ teeth. … When he speaks of his sister he says, “I give her sago and she gives me beadwork”; when he speaks of his dead father he mentiones the huge burial payment he made for him. … The whole of life, his most intimate relation to people, his conception of places, his evaluation for his guarding spirits, all fall under the head of kawas, “exchange.” He has no other word for friend, naturally friendship too falls under the spell – friends are people with whom one trades, or who help one in trade. … Pregnancy, birth, puberty. Betrothal, marriage, death, are thought of in terms of dogs’ teeth and shell money, pigs and oil.” (61)

“Manus men, uninterested in friendship themselves, are intolerant of friendship on the part of their wives. As one woman phrased it: “If a man sees his wife talking for a long time with another woman or going into another woman’s house, he will look at her. If she is her sister or sister-in-law, it is well. If she is an unrelated woman, he will scold his wife. He may even beat her.” (68)

“But with her own feminine relatives a woman must always speak circumspectly. Her husband is tabu to them, their husbands are tabu to her. … A daughter cannot comment upon her married life to her mother who has never even been allowed to look her daughter’s husband in the face.” (68)

“All through adult life in Manus there is a struggle between a man’s wife and a man’s sister for his allegiance and his gifts.” (68)

“When they do discuss events of adult life it is in very practical terms. So Kawa, aged four, remarked, “Kilipak, give me some paper.” “What do you want it for?” “To make cigarettes.” “But where’s the tobacco coming from? “Oh, the death feast.” “Whose?” “Alupu’s.” “But she’s not dead yet.” “No, but she soon will be.”

“Sex play is barred out, because of the specialization of the cross cousin picture. A woman asked if her husband is permitted to touch her breast indignantly replies, “Of course not; that [privilege] belongs to my cross cousin only.” (119-120)

“For the Manus carry the doctrine of confession to its logical conclusion. A sin confessed, is a sin wiped out. There is no word for virgin, and disgrace following confession is temporary.” (120)

“There is no word for love in the language. There are no love songs, no romantic myths, no merely social dances. Characteristically, the Manus dance only when a great deal of property is given away, and after a period of mourning, “to shake the dust from the house floor.” (124)

“But in Manus as in America, life is not viewed as an art which is learned, but in terms of things which can be acquired. Those who have acquired them can command those who have not.” (157)

“Hilaire Belloc has counted it a virtue that in America a rich man is never worshiped slavishly as he is in Europe. But a deeper probing reveals this as really symptomatic of a loss. In Europe rank and breeding and responsibility have for so long been the accompaniment of wealth, that the European who bows before the rich men, thinks that he is honouring these things.” (157)

“It is not without significance that the English literature courses show a tendency to attract the superior women and the inferior men. The records of other countries do not show any special aptitude of women for the arts, in fact the exponent of the theory of ferminine inferiority can find plenty of proof to the contrary. But in this country the arts are discredited as a male pursuit; and it may well be that one of the great causes of their low estate is that they are taught by the sex with whom the boy students can not possibly identify themselves.” (174)