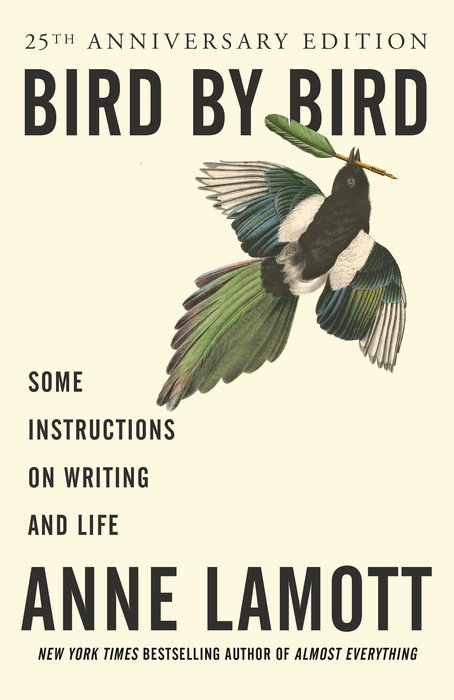 In seventh and eighth grades I still weighed about forty pounds. I was twelve years old and had been getting teased about my strange looks for most of my life. This is a difficult country to look too different in—the United States of Advertising, as Paul Krassner puts it—and if you are too skinny or too tall or dark or weird or short or frizzy or homely or poor or nearsighted, you get crucified.

In seventh and eighth grades I still weighed about forty pounds. I was twelve years old and had been getting teased about my strange looks for most of my life. This is a difficult country to look too different in—the United States of Advertising, as Paul Krassner puts it—and if you are too skinny or too tall or dark or weird or short or frizzy or homely or poor or nearsighted, you get crucified. I did.

And then I tell my students that the odds of their getting published and of it bringing them financial security, peace of mind, and even joy are probably not that great. Ruin, hysteria, bad skin, unsightly tics, ugly financial problems, maybe; but probably not peace of mind. I tell them that I think they ought to write anyway. But I try to make sure they understand that writing, and even getting good at it, and having books and stories and articles published, will not open the doors that most of them hope for. It will not make them well. It will not give them the feeling that the world has finally validated their parking tickets, that they have in fact finally arrived.

My writer friends, and they are legion, do not go around beaming with quiet feelings of contentment. Most of them go around with haunted, abused, surprised looks on their faces, like lab dogs on whom very personal deodorant sprays have been tested.

The very first thing I tell my new students on the first day of a workshop is that good writing is about telling the truth.

But after a few days at the desk, telling the truth in an interesting way turns out to be about as easy and pleasurable as bathing a cat.

Flannery O’Connor said that anyone who survived childhood has enough material to write for the rest of his or her life.

E. L. Doctorow once said that “writing a novel is like driving a car at night. You can see only as far as your headlights, but you can make the whole trip that way.” You don’t have to see where you’re going, you don’t have to see your destination or everything you will pass along the way. You just have to see two or three feet ahead of you. This is right up there with the best advice about writing, or life, I have ever heard.

One writer I know tells me that he sits down every morning and says to himself nicely, “It’s not like you don’t have a choice, because you do—you can either type or kill yourself.”

Almost all good writing begins with terrible first efforts. You need to start somewhere. Start by getting something—anything—down on paper. A friend of mine says that the first draft is the down draft—you just get it down. The second draft is the up draft—you fix it up. You try to say what you have to say more accurately. And the third draft is the dental draft, where you check every tooth, to see if it’s loose or cramped or decayed, or even, God help us, healthy.

Perfectionism is the voice of the oppressor, the enemy of the people. It will keep you cramped and insane your whole life, and it is the main obstacle between you and a shitty first draft.

I think perfectionism is based on the obsessive belief that if you run carefully enough, hitting each stepping-stone just right, you won’t have to die. The truth is that you will die anyway and that a lot of people who aren’t even looking at their feet are going to do a whole lot better than you, and have a lot more fun while they’re doing it. Besides, perfectionism will ruin your writing, blocking inventiveness and playfulness and life force (these are words we are allowed to use in California).

She explained that when we have a wound in our body, the nearby muscles cramp around it to protect it from any more violation and from infection, and that I would need to use these muscles if I wanted them to relax again.

I think that something similar happens with our psychic muscles. They cramp around our wounds—the pain from our childhood, the losses and disappointments of adulthood, the humiliations suffered in both—to keep us from getting hurt in the same place again, to keep foreign substances out. So those wounds never have a chance to heal. Perfectionism is one way our muscles cramp. In some cases we don’t even know that the wounds and the cramping are there, but both limit us. They keep us moving and writing in tight, worried ways. They keep us standing back or backing away from life, keep us from experiencing life in a naked and immediate way.

Now, it might be that your God is an uptight, judgmental perfectionist, sort of like Bob Dole or, for that matter, me. But a priest friend of mine has cautioned me away from the standard God of our childhoods, who loves and guides you and then, if you are bad, roasts you: God as high school principal in a gray suit who never remembered your name but is always leafing unhappily through your files. If this is your God, maybe you need to blend in the influence of someone who is ever so slightly more amused by you, someone less anal. David Byrne is good, for instance. Gracie Allen is good. Mr. Rogers will work.

Perfectionism is a mean, frozen form of idealism, while messes are the artist’s true friend. What people somehow (inadvertently, I’m sure) forgot to mention when we were children was that we need to make messes in order to find out who we are and why we are here—and, by extension, what we’re supposed to be writing.

I once asked Ethan Canin to tell me the most valuable thing he knew about writing, and without hesitation he said, “Nothing is as important as a likable narrator. Nothing holds a story together better.” I think he’s right. If your narrator is someone whose take on things fascinates you, it isn’t really going to matter if nothing much happens for a long time. I could watch John Cleese or Anthony Hopkins do dishes for about an hour without needing much else to happen.

If you are looking for long, brilliant discussions of plot, E. M. Forster and John Gardner have written books in which they discuss it so lucidly and wisely that they will leave you howling like a wolf.

Plot grows out of character. If you focus on who the people in your story are, if you sit and write about two people you know and are getting to know better day by day, something is bound to happen. Characters should not, conversely, serve as pawns for some plot you’ve dreamed up.

So focus on character. What happens in Faulkner’s books, for instance, arises from the nature of his characters, and even though his characters are not necessarily people you want to date, they compel us because we believe that they exist and we believe that the things they do are true to who they are. We read Faulkner for the beauty of his horrible creations, the beauty of the writing, and we read him to find out what life is about from his point of view. He expresses this through his characters. All you can give us is what life is about from your point of view. You are not going to be able to give us the plans to the submarine. Life is not a submarine. There are no plans.

Find out what each character cares most about in the world because then you will have discovered what’s at stake. Find a way to express this discovery in action, and then let your people set about finding or holding onto or defending whatever it is. Then you can take them from good to bad and back again, or from bad to good, or from lost to found. But something must be at stake or you will have no tension and your readers will not turn the pages.

Drama is the way of holding the reader’s attention. The basic formula for drama is setup, buildup, payoff—just like a joke. The setup tells us what the game is. The buildup is where you put in all the moves, the forward motion, where you get all the meat off the turkey. The payoff answers the question, Why are we here anyway? What is it that you’ve been trying to give? Drama must move forward and upward, or the seats on which the audience is sitting will become very hard and uncomfortable. So, in fact, will the audience. And eventually the audience will become impatient, disappointed, and unhappy. There must be movement.

The climax is that major event, usually toward the end, that brings all the tunes you have been playing so far into one major chord, after which at least one of your people is profoundly changed. If someone isn’t changed, then what is the point of your story? For the climax, there must be a killing or a healing or a domination. It can be a real killing, a murder, or it can be a killing of the spirit, or of something terrible inside one’s soul, or it can be a killing of a deadness within, after which the person becomes alive again. The healing may be about union, reclamation, the rescue of a fragile prize. But whatever happens, we need to feel that it was inevitable, that even though we may be amazed, it feels absolutely right, that of course things would come to this, of course they would shake down in this way.

She said that sometimes she uses a formula when writing a short story, which goes ABDCE, for Action, Background, Development, Climax, and Ending. You begin with action that is compelling enough to draw us in, make us want to know more. Background is where you let us see and know who these people are, how they’ve come to be together, what was going on before the opening of the story. Then you develop these people, so that we learn what they care most about. The plot—the drama, the actions, the tension—will grow out of that. You move them along until everything comes together in the climax, after which things are different for the main characters, different in some real way. And then there is the ending: what is our sense of who these people are now, what are they left with, what happened, and what did it mean?